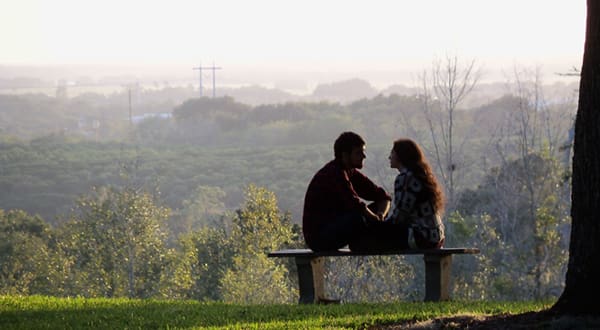 The problem with premature affection

“All he wants to do is sit on the sofa and be chummy!”

“Once I let a guy put his arms around me he never wants to do anything else!”

“He’s a lot more in love with my body than he is with me.”

I hear this from girls repeatedly. Often, I’m the one saying it.

I think I offended one boyfriend years ago. He wanted to put his arms around me and I told him I wanted to pull weeds in his backyard. (I know! Poor timing.) We weren’t doing anything “bad,” but there were a lot of good things we weren’t doing either. His behavior was respectful, but his focus was almost entirely on my body. We had only been dating three months and I felt like our friendship had disappeared. I wanted us to pull weeds together. I wanted us to work side by side. I wanted us to joke back and forth like we used to, maybe throw weeds at each other—be friends.

It’s easy for Catholics to think “we’re not falling into sin, so what’s the problem?” If you’re not sinning, great! But the goal of dating isn’t just to avoid sin. The goal is to find and grow genuine love.

Appreciation of the body isn’t bad. The body is good, and God Himself made sexual attraction this powerful. It’s simply that in the early days of building a relationship it’s not time to encourage infatuation yet. There are too many other things a healthy relationship needs to set in place first. Once the mesmerizing fun of affection begins, communication, solving problems, and sharing your life goals get brushed aside, sometimes forever.

St. John Paul II addresses this in Love and Responsibility (206): “Such premature tenderness in the association of a man and a woman quite often destroys love, or at least prevents it from developing fully, of ripening both internally and objectively into a genuine love.”

Premature affection, even innocent affection, will only hinder a relationship, not help it. It rushes the romance ahead while the friendship is still far behind. It creates an illusion about your relationship and people get hurt. Impurity is nothing but lying with your body. Purity is telling the truth with your body about the relationship you actually have.

Both men and women can get hurt this way, but women seem especially vulnerable. Unless she has been desensitized through long-term sin or abuse (which is tragic and not how she was created) a woman isn’t capable of separating her heart from her body. When a man touches her body—even appropriately—he’s touching her heart. If she’s the center of his world, his top priority, and his deep, intimate friend when she’s in his arms, her heart will expect the same treatment when she’s not in his arms—even when her head knows better. But it’s not true. Their relationship is way too young for her to be his top priority and deep, intimate friend yet.

The amount of affection lies to her heart. Soon her heart feels betrayed. She becomes hurt, angry, demanding of his time and attention, and even resents his romantic overtures. But most young women don’t have enough experience or self-awareness to pinpoint where her anger comes from. If she doesn’t know, the guy certainly doesn’t! He only sees her over-reacting and blows it off. This makes the girl angrier. It’s a destructive cycle.

Guys, please remember you guard our hearts by guarding our bodies from premature affection. Girls, remember guys are visual and easily stimulated. Don’t flaunt or tease them with what they can’t touch until marriage. Help each other to focus on building your friendship first. Help each other to “avoid the near occasion of prematurity.” Don’t stay up late alone together. Don’t spend hours sitting alone together. Keep most dates in public, or with groups of friends. Spend your time pouring over your mutual interests and sharing your different interests with each other. That’s how friendships grow deep and strong.

Yes! It’s everyone’s favorite four-letter-word again: wait. But once you understand what will truly grow your love, you’ll be willing to wait. If you’ve only been dating for several months, you’re still in the process of becoming friends. So why be more than friendly? Some affection can be good, but not when it overshadows everything else. Keep affection short, sweet, and simple. Focus on building a deep, time-tested friendship first, and your love will be amazing.

Ladies: “We adjure you, daughters of Jerusalem, by the gazelles and hinds of the field, do not arouse, do not stir up love before it’s own time.” Song of Songs 2:7

If you do this, your relationships will not only be good, they will be the best.

Sarah Karlyn Larue is a 27-year-old author of eight books, who loves her Faith and loves writing and is happiest when putting them together. Her latest series, That They Might Have Love is for all Catholic young women who want to seek God first in their love lives and find greater love and joy when they are single, dating, and married.